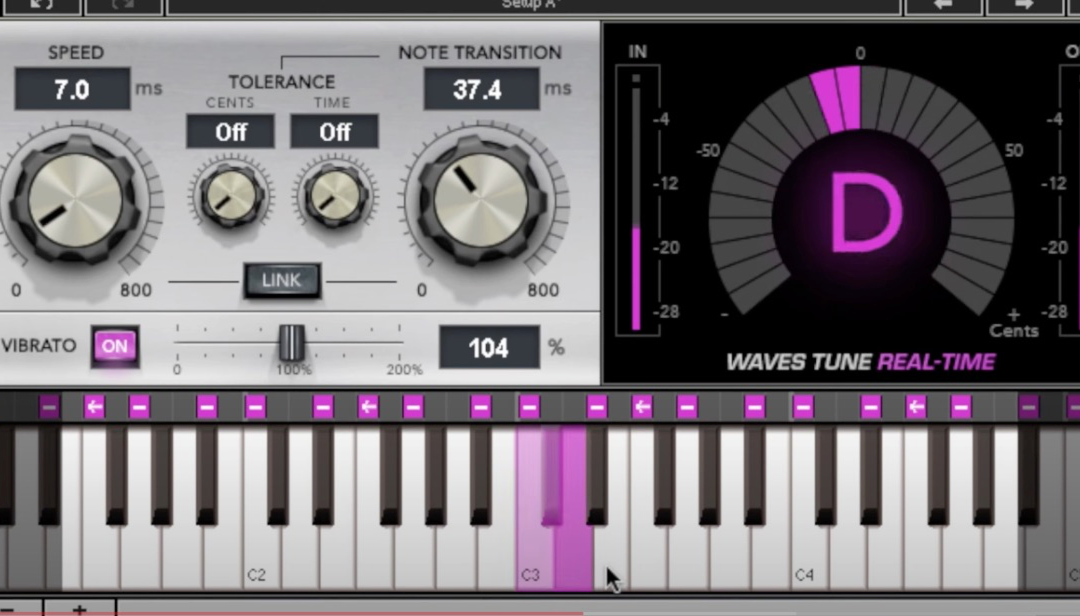 The Waves Tune Real-Time is a software audio processor that corrects pitch in vocal performances, in real-time. It enables you to perform straightforward live or studio tasks with ease and confidence. With the Waves Tune Real-Time plugin, you can just sing for hours without any need of tuning your voice before singing on stage or recording your album. The feedback is instantaneous, so you know when it’s right and when it’s wrong. Plus, if there are some flaws in the song like wrong notes or bad intonation, they will be fixed by this tool as well.

The Waves Tune Real-Time plugin comes with three modes: Original Pitch mode which uses no correction; Fixed Pitch mode which fixes all the errors in the pitch; and Slider mode which corrects pitch in an adjustable way. There is also a Manual Pitch button where you can set the frequency to be used for tuning your vocals. It is up to you how much of this correction you will add. But if you add too much, it might sound like robots singing rather than real people on the microphone. The original pitch mode is very useful when you want to have a totally natural sound on your vocals without any correction at all. When you have finished recording, if there are some pitches that are more or less than others, then you can engage the fixed pitch mode which corrects everything for you. There are also different scales available for the fixed pitch mode where you can choose the one that suits your voice or song better.

The Waves Tune Real-Time plugin makes it possible to sing at low volume, in a warm nightclub with high acoustic reflections, without having to worry about applying any correction to your voice later on when you are home and everything sounds less loud. It is also beneficial to the sound engineer because the pitch correction will take place even before you start recording. You can easily go back and correct any pitch corrections that are not perfect using tools like Pro Tools, Audacity, Melodyne, or other pitch correction software. The Waves Tune Real-time plugin is very useful when you want to save time on editing vocals after recording because it will correct all the mistakes in pitch.

The Waves Tune Real-Time plugin also comes with a slider mode that gives you full control over how much correction effect you want to have on your vocals. There are scales for this mode as well, where you can choose which scale would fit better with your voice or track. This plugin is very useful when you want to add some corrections but not too much. Plus, it has a Manual Pitch button where you can set the frequency of the correction and even fine-tune it. You can also change the scale in this mode if that one doesn’t work for you.

This plugin makes it possible to correct your vocals in real-time while you are singing, so the next time when you’re in the studio or at home working on your track you can easily edit all of the mistakes that might have been made during singing. The best thing about this is that it doesn’t alter your voice and it doesn’t change the way you sound. It is only there to help you with the pitch and overall clarity of any music production work that you might be doing.

Waves Tune Real-Time is a software audio processor that corrects pitch in vocal performances, in real-time. It enables you to perform straightforward pitch correction with precision and grace that never sounds artificial. The plugin can be used on vocals or instrumental recordings, fixing out-of-tune notes, tuning vocals to fit the key of the arrangement, improving the intonation of vocal solos or backing vocals, and matching the pitch of one instrument to another.

Waves Tune Real-Time features simple, straightforward settings. All the controls are interactive and the workflow is straightforward, so you can fix tuning issues in your tracks quickly.

With Waves Tune Real-Time, fixing out-of-tune notes in vocals has never been easier—and sounded better! Using this plugin is like having a dedicated studio engineer adjust the pitch of your voice.

The plugin is available in the form of a native AAX, AudioUnit, RTAS and VST plug-in for Mac OS X (10.6 or higher) systems as well as an AudioSuite version for Pro Tools hardware systems.

• “Best of 2008” awarded by Sound on Sound magazine (UK), and is considered one of the most innovative audio tools to date for pitch/frequency correction and manipulation.

The Waves Tune Real-Time plugin appears to be the only product that claims to monitor and correct pitch in real-time using fundamental frequency analysis. According to Waves, this software is directly derived from their hardware processors designed for professional use by “studio engineers” to correct out-of-tune vocals or instruments during live performances or pre-recorded tracks.

There is also an option to upgrade your free version to a paid one. If you want more scales and different functions such as using it as a real-time pitch correction tool, then you can do that by purchasing the Waves Tune Real-time Pro Bundle which only costs $19.95 if you are already a Waves user or $49.95 for new users. The regular version is only open to users who have registered their product after buying it at a regular price. It isn’t available on any other platform except for these two mentioned before which means that you can create music on your macOS or Windows desktop and come up with a track really fast. You can even do some post-processing work to your vocals with the Waves Tune real-time plugin and save a lot of time later on if you want to edit your vocals.

This is definitely one of the better pitch correction tools out there because it comes with three main modes for users, similar to Auto-Tune which is basically an upgraded version of the Waves Tune Real-Time plugin. It allows you to sing and record your vocal performance with real-time pitch correction and then clean up the mistakes that you made in pitch afterward. You can then save it as a track, session or move over to another editing/mixing program such as Pro Tools, Logic, or any other editing software.

Waves Tune Real-Time processes the audio signal first by splitting it into two separate signals, one of which is used to analyze incoming pitch information. This analysis generates a harmonic spectrum with its own envelope and frequency components that are analyzed again by the plugin. The input signal envelope allows for more transparent results during drastic changes in loudness or harsh attacks. The measured fundamental frequency and harmonic spectrum envelope are then compared with the correct notes and the errors in pitch are detected. The output signal is then recreated by silencing input signals for incorrect pitches and amplifying correct ones, to allow the user to mold and control the outcome according to desired parameters for correction or special effects.

Vocalists who use Waves Tune Real-Time have an advantage since they can perform more confidently. They also focus on the emotions of their performances and not on constantly tuning themselves.

“A dream tool that helps vocalists stay in tune while singing, feel confident, and focus on the emotion of their performance, in the studio or live on stage.”

“Vocalists who use Waves Tune Real-Time have an advantage since they can perform more confidently.”

“They also focus on the emotions of their performances and not on constantly tuning themselves.”

“Simply This!” Waves Tune is a software plugin that corrects pitch in vocal performances, in real-time. It enables you to perform straightforward pitch correction or choose to retain natural pitch variations. You can use it straight out of the box, but there are also plenty of options for customizing your sound.

“There are also plenty of options for customizing your sound.”

Waves Tune works in real-time, so you can sing or speak live to your tracks.

“Waves Tune works in real-time, so you can sing or speak live to your tracks.”

What’s unique about Waves tune is that it allows for subtle pitch correction when required and doesn’t mess with the natural feel of your voice.

The pro bundle is worth it to upgrade because it includes all of the tools needed. The old version of the software had some features that were missing from the new one. It’s worth upgrading because there are no flaws with the software from what I have seen.

The Waves Tune Real-Time plugin is available from the Waves website. You can also purchase it from a number of other retailers, such as Guitar Center and Amazon. The cost for a single license is $199.99, and a license for the plugin with the standard bundle is $399.99. Waves offers discounts for educational institutions, students, teachers, and that old guy down at the end of your street who always says hello and waves to kids as they walk by.

Wave Tune Real-Time is compatible with PC and Mac operating systems, but will only work with a DAW that supports RTAS, VST, AU, or AAX plugins.

To install Wave Tune Real-Time to a PC you will need a Windows operating system and the installer from the Waves website. You do not need any special tools or knowledge of computers to complete this installation process either, as it is very simple and direct. The Waves Tune Real-Time installer is only 7.9 MB, so you can have it up and running from the download in no time at all!

Waves Tune Real-Time is a software audio processor that corrects pitch in vocal performances, in real-time. It enables you to perform straightforward and sing anywhere, without being burdened with the fear of going flat or sharp. With Waves Tune Real-Time vocals can be recorded live on stage, at concerts or whenever you feel like singing along with your favorite tracks! You no longer have to worry about tuning before every performance because now it’s possible for singers everywhere to stay confident and focused on their emotions while performing – all thanks to technology.